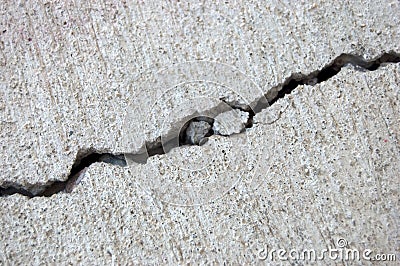 Several years ago, my wife and I excitedly watched the cement being poured for the foundation of our new home.  You don’t really realize just how much cement it takes to pour a foundation, not to mention a patio and a driveway, until you watch them do it over a full day.

After that task was completed, we came back the following morning after the cement had hardened to check on the finished work.

And that’s when we noticed something that peaked our curiosity:

The same men that had been carefully pouring and smoothing the cement for our new home were now etching deep lines at various points in the foundation, and even cracking it in certain places!

“What are they doing!?!?” I thought to myself.  I wanted our foundation to be perfect.  I was looking for smooth and beautiful, not cracked and etched.  The control freak in me couldn’t resist pointing out this apparant problem to one of the men overseeing the operation.  The answer he gave me was enlightening.

“We do that because we want to be the ones to determine where the cracks are in the foundation”, he explained.  “It’s going to crack over time anyway.  But if we establish the main crack lines now, and etching those deep lines in the driveway as we’re laying the concrete, we can make sure that no cracks show up later in places we don’t want them.”

All of a sudden, the cracks weren’t a bad thing.  I understood their purpose, and the benefit to the overall structure.

And that’s where the lesson for you, as acollege coach and recruiter, comes in…

You need to show the cracks in your program early on for your prospects.

To achieve that, you have to understand what many coaches want to do first.  I have found, as we go to campuses to work personally with coaches and athletic departments, that many recruiters want to paint to “smooth” of a picture to their prospects.

“If you come to my program, we’re going to build everything around you.  You’re going to be the star for the next four years.”

“Here at our school, they you’ll get all the extra academic help that you need.  We make sure that you won’t struggle with academics at all.”

“The weather here is amazing all year long.  Yes, it gets a little cold during the winter, but our kids love it.”

You get the point, right?  Do some of these sound familiar, Coach?  If you worry too much about presenting the “perfect” college situation for your prospect in everything you show them and tell them, you probably run the risk of making the prospect question whether they are getting the real story from you.  Kids today are smart, and they know that nothing is perfect at any college they visit.

So, its best to show them your cracks before they show up in unexpected places, at unexpected times.  In other words, it’s going to benefit you if you control where the cracks show up.

As we outline in great detail in our two recruiting workbooks for college coaches, most prospects are actively searching for the seedy underbelly of your college and program:  They’re looking for what’s wrong with your program, why they wouldn’t like the other players, and other reasons to cross you off the list.  Choosing a college program is a process of elimination for most prospects.

The point I’m trying to make?  They’re looking for your cracks.

Here are two big benefits to exposing and strategically defining the cracks in your program, and one idea on how to do it:

Coaches who highlight and reveal their negatives don’t risk losing the interest of a prospect.  On the contrary, those that do it creatively and sincerely will stand-out among those colleges that are recruiting them.

So get busy this week, coach, and start figuring out where you can start “cracking”!

Previous Post: « Back to Basics: Do You REALLY Know How to Type?
Next Post: The Difficult Art of Delegation »