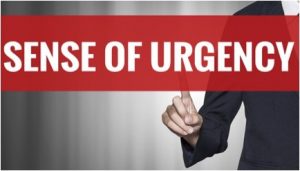 The topic for my article this week comes from a conversation I had with an Associate Director yesterday at SACAC. He wanted to pick my brain about creating urgency without pressuring his admitted but undecided students.

His fear was that he was unintentionally pressuring a lot of those students, and that was having a negative effect on both future conversations (i.e. getting them to answer his calls or respond to his emails) as well as the student’s final decision.

Does any of this sound familiar? It’s a common challenge for recruiters, which is why I want to provide you with a couple of things that you can do to correct your approach if you’re dealing with the same thing.

First let me touch on what I absolutely don’t recommend you do. Some schools have told me they’ve created “fake” deadlines to speed up a student’s decision-making process. Doing that creates bad pressure that will end up driving some students away from your school completely, or prolonging their decision even further.

Instead I want you to talk with the student or family about being a partner in the process. There’s proven strategy and psychology behind that approach. You create the right kind of urgency by setting clear, long-term timeline expectations for a student as early as possible in the process.

For example, as you start to have conversations with high school juniors in the coming weeks, I want you to help those students build out the next 6 to 10 months and what that typically looks like for most students. And if your school has specific deadlines that are different than most of your direct competitors, you’ll want to talk about and include those as well. It doesn’t have to be exact, and it’s okay if together you edit that timeline at some point. Just make sure that both you and the student/family are in agreement on the timeline. I would even go so far as to ask them after you build it out if they’re in agreement with everything you’ve discussed.

And if you’re near the end of the process and you haven’t built out a timeline with one of your admitted but undecided seniors, I would strongly encourage you do so immediately. You could talk to them about the timeline goals of your office, and ask what they feel they need to do before they’ll be ready to make a final decision.

Let me add one more thing. If an undecided senior isn’t willing to build out a timeline with you right now, I would question just how serious they are about your school and ask a few targeted follow-up questions.

Remember, it’s about the way they want this process to go, not the way you need it to go.

In addition to building out those clear, long-term timelines, here are three other simple things you can do to create the right kind of urgency.

Was this article helpful? I’m always interested in hearing what you think. And, if you have a question about urgency or something else that you’re dealing with right now, let’s start a conversation. Like that Associate Director, all you have to do is ask.

Previous Post: « How Coaches Are Making Life Easier with This Checklist System
Next Post: The Coaching Story They Tell About You »