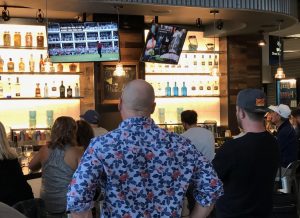 On the night Tiger Woods won his first tournament in five long years, following his very public personal setbacks and injuries, I was at the airport.

Every television was tuned to his final few holes, and crowds of people were clogging the aisles, gathered around to watch Tiger finish off his comeback.

Tiger Woods has won before, no big deal there. I seriously doubt every person watching was an avid follower of the PGA. So why all the interest in Tiger Woods winning (another) golf tournament?

Because of the story.

Because when it comes right down to it, we’re a sucker for great stories. And it seems like all of us are in agreement that Tiger’s comeback is a great story. But what exactly makes his story such an interesting one? Some of the same things that absolutely terrify college coaches when they’re faced with telling those parts of their stories to recruits.

Here are some examples:

The rise. Was there anything more awe-inspiring and exciting than watching Tiger Woods absolutely dominate professional golf in those first few years? We were watching him redefine the game, and add a glitz and glamour to the game that hadn’t been seen before.

Now, granted: For college coaches, the rise is probably the easiest to talk about with their recruits. But what I often see, in the language and approach that a coach who is leading his or her program to new heights, is humility that is almost crippling. The same “work-hard-but-don’t-call-attention-to-myself” approach to life that fueled you to greatness when you were an athlete is, ironically, now handcuffing your efforts to parlay that rise into better recruiting results.

There is a time to clearly state why you are a program that should be a destination for prospects, and why they should want to be there. Confidently, unapologetically, and enthusiastically. Don’t aw-shucks your way through your program’s rise. Talk about it, and let your prospect feel the energy of everything that’s going on in your program. That’s what drew us to Tigers’ rise, and that’s what is going to attract your recruits to your story, as well.

The struggle. Remember when Tiger started to slip a little? By then, aside from die-hard Tiger fans, we were getting a little tired of all the winning. In fact, there were plenty of stories at the time of other golfers (and fans, and the media) who were actually a little excited about him slipping a little and starting to struggle.

When college coaches and their programs struggle, or slip a little bit in their performance, you need to answer the question that we were asking about Tiger when he was struggling: “What’s going on?”

More than nine out of ten coaches I talk to would want to shy away from answering that question for a prospect, hoping that it gets overlooked in their decision making. It doesn’t. The only difference between what’s going on with them compared to Tiger’s is that we had non-stop 24/7 news coverage about his struggles, so it was easy to have the conversation. Your recruits, in case you haven’t noticed, tend not to spill out their every concern and question about you and your program – especially during your struggles.

My recommendation: Identify the struggle, lead with it in your conversations with your recruits, and explain it. As we talk about frequently during our on-campus recruiting workshops, it is your job as their recruiter to tell them how to think about something related to you, your program, or your college. They don’t have SportsCenter to explain it to them and offer in-depth analysis; they’re left with their own thoughts, which frequently don’t give you much slack in trying to come up with a logical reason you’re struggling. Fill that gap for them, Coach.

The fall. Your worst finish in the last ten years. You just took over a program after the last coach was fired. Your athletic department just dropped two sports. Five of your upperclassmen just quit the team, and their opinionated parents are talking to the media about why their sons or daughters decided to jump your sinking ship (spoiler alert: They usually pin the blame on you, Coach).

True, on the scale of public humiliation, it’s not stories of your spouse chasing you down the driveway with a golf club smashing the daylights out of your car before filing for divorce as you’re in the middle of a substance abuse problem…but in your world, it’s still feeling pretty awful.

What do you do? Most coaches get back to putting their head down, and working hard, never addressing the fall. Or, worse, they come up with lame excuses that recruits and their parents see through.

Just like during the struggle, it’s my strong advice that you acknowledge the fall, dissect what went wrong, and then explain your vision for how you see your prospect being a part of the comeback. That’s what they’re looking for, Coach…a reason to say yes. If you don’t give it to them, their own reasons to say no usually speak to loudly for them to take the risk and sign-on to your rebuilding effort.

(A quick note on these last two phases of a great story: First, very few great stories don’t include a struggle and a fall. Unfortunately, years of Hollywood movies have conditioned us to look for those elements in a good story. So, they’re necessary. Don’t bemoan the fact that you’re going through a struggle and/or fall; instead, embrace it! You’re about to be able to tell a great story for your recruits).

The comeback. Why was everyone gathered around airport televisions during Tiger’s final round that I described earlier? It helped complete the story. We all knew the first three parts of the story, but we were missing the end. Ever have to leave a movie unexpectedly 3/4 of the way through it? It feels like you got ripped off…you were sitting through the struggle and fall in order to get to the comeback. We’re a society addicted to comebacks.

Your recruits are, too. They want to be a part of one, but you have to explain why they should want that. And, you have to tell the story of how they fit into your overall plan for accomplishing it. That’s how you get good athletes to say to yes to playing for bad programs: They have bought in to the story. But you absolutely have to start telling it, Coach. With enthusiasm, confidence, and urgency.

We now know the latest chapter in Tiger Woods’ story. What are your recruits waiting to hear from you so they fully understand your story, Coach?

Previous Post: « Increasing the Value of Your Coaching, and Why You Should Do It ASAP
Next Post: Are They Full of Anticipation or Anxiety? »