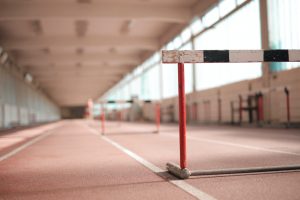 Facing a prospect objection isn’t just inconvenient and frustrating.  For a college coach, it may also be a job hazard that can trip-up the best laid recruiting plans.

Because if your prospect’s objections aren’t being overcome throughout the recruiting process, they are probably not going to sign with you and your program.

It’s nothing personal, Coach.  But the way they’re wired makes it almost impossible for them to commit to something that they aren’t sold on, and they certainly aren’t going to come compete for you if they have downright negative vibes about you, your team or your program.

Since coaches are preparing to deal with the objections in a new recruiting class, I wanted to give everyone three core principles to take into a recruiting situation with them when it comes to facing, and overcoming, their initial objections.  Here they are:

PRINCIPLE #1:  You should want to hear objections from your prospects, especially the ones you really want.

Whenever I talk about that when I work with coaches in an athletic department during one of our On-Campus Workshops, I often get puzzled looks.  “I want people to object to something about our campus or our program???”  Yes, Coach, you do.

An objection usually indicates that they are actively listening, processing the information that they are seeing themselves or hearing from you, which is the first step in them reaching a decision on whether or not to come to your school.

Think about it: When was the last time that you signed a prospect that didn’t have questions, concerns or firm objections to something you talked to them about:  Your dorms, their role on the team, the amount of (or lack of) a scholarship offer…most coaches face objections all the time.
When you hear an objection, it’s a classic “buying signal”.  It means you are one step closer to getting them to see it your way.

So, your attitude should be one of “alright, now we’re getting somewhere!” as opposed to “oh brother, here we go again”. Think about it, Coach:  How often have you signed an athlete that had zero questions and objections while you were recruiting them?  Not many, I’d bet.  Like I wrote in our two recruiting guides for college coaches, if they aren’t serious about you, they won’t take the time or emotional investment to object to what you’re telling them.

This is a huge, life-changing decision that you’re asking them to make.  Don’t be surprised if you hear them (or their parents) bemoan the details along the way as they come to grips with the realities of recruiting as opposed to their unrealistic expectations of their “perfect” college program.

PRINCIPLE #2:  When you hear an objection, your initial reaction and re-direction is key to keeping them listening to you.

If your prospect takes the time – and the “risk” – in verbalizing something that they see as not fitting in with their view of college sports or college life, you’ve got a serious prospect on your hands.

The next step is the second principle of overcoming objections that I’d want any of my clients to take, and that is to make their prospects, or their prospects’ parents, feel comfortable voicing more objections.  Through your reaction, body language and words, let them know that it’s o.k. not to love everything about what they’re seeing or hearing from you and your college.

This is crucial because you want to open up the lines of communication further, and keep them open throughout the process.  What we find when we are researching this subject at universities across the country is that today’s teenagers aren’t comfortable communicating with outsiders they don’t know, and are apt to internalizing things that don’t match their view of what their “perfect” college should be like.  To help open those fragile lines of communication, make every effort to treat objections as “normal”:

• “Oh, we get that all the time.  That’s an easy one to answer…”
• “One of the players that came here in our last recruiting class felt the same way about the on-campus housing.  But now that she’s here, what she’s discovered is…”
• “Hey, that’s a really good observation.  Before I talk to you about it, are there any other big worries about us on your list?…”

You want and need a steady line of communication flowing to you throughout the process.  Treating it like you are comfortable with talking about it, and letting them know that you don’t think less of them for bringing up what they might view as a sensitive topic, is going to go a long way towards making (and keeping) a connection between you two.

PRINCIPLE #3:  MIX LOGIC, EMOTION AND INFORMATION AS YOU RE-DIRECT THEIR OBJECTION INTO A SELLING POINT.

Unfortunately, this is the hardest principle to master for most college recruiters.  However, once you recognize it and react to it, actually answering their objection and giving your prospect a new frame of reference in how to view that objection is absolutely key in the process.

So, here’s what I want you to do after you’ve addressed the first two principles that I talked about:

• Use logic to answer their question or objection by telling them how they should think about a particular issue.  What I am suggesting is that they may throw out an objection that is not based in fact at all; rather, it is a picture that they’ve painted over time in their own mind.  Understand that in most cases, when an objection is raised, they are listening to whether you confirm their current line of thinking, or if you correct them with a new line of reasoning. Logical, fact-based information is needed to replace their own misconceptions about a particular issue.
• Use emotion to begin to re-direct their objection.  You see, many of the athletes we interview based their objections on emotion: How they feel about the other athletes during their visit…the feel of a college campus on a tour…determining whether you would be a “good fit” for them as their future coach. To answer them, use emotion to your advantage: Talk about the way you’d see them fitting in to the team’s personality if they can get past a certain objection…show them what game day will feel like in order to prove that your program is just as good as a competitor.  There are lots of ways to answer an prospect’s emotionally-based objection by using emotion yourself.
• Use information to re-direct their objection.  Do you know when the best time to have an informational conversation about one of your big objections is?  Before they bring it up…especially if it’s an objection that is “the big one” that almost every recruit asks about or would notice during a visit.  Here’s an example: We began work with a coach who became a new TRS client four or five months ago.  One of their big objections was the condition of their on-campus housing.  It was 30 years old, and looked it.  The coaching staff we are working with avoided showing the housing to prospects altogether – big mistake, because kids must see where they’re going to live.  Our answer, with the help of the athlete focus group we assembled for two hours during our initial visit, was to take the focus away from the structure and center the attention on the incredible social atmosphere that existed in the dorms…one of the big plusses of their campus experience, according to the athletes at that school.  So, we talked about it right out of the gate when we put together their first series of messages…we didn’t hide from it, we used information to tell them how they should think about their housing, and what to look for when they saw it on a campus visit.  Most importantly, we did this before it became an objection in the mind of the recruit…make sure you define the objection for them at the start, instead of having to try and change their mind later.  That’s a key factor in successfully re-directing an objection, and turning it into a selling point in college recruiting.

This area of recruiting is where the rubber meets the road, in most cases.  Nearly all of the time, your recruits are going to have questions or objections that will pop into their mind during the process. It’s not a matter of “if” that happens, but when (and how often).

Your job is to hunt down those objections each step of the way, and re-direct them using these three principles that we’ve put to work ourselves in our daily work with our clients.  Apply your own unique situation and challenges to this step-by-step approach for answering objections, and watch how it changes the outcome of your recruiting.

Previous Post: « P.S. You Need This in Your Recruiting Message
Next Post: One Simple Trick to Get More Prospect Applications »