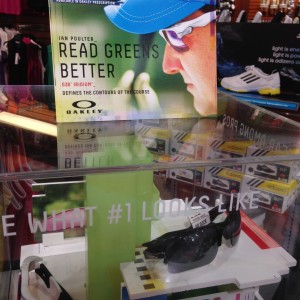 Hold on a second:

That was the promise.  Lured by the temptation of the tagline “seeing what #1 looks like”, I studied the ad display in the middle of the mega-sports store for more than a few minutes.

I came to the conclusion that it was brilliant.  And, as I thought about it later that afternoon, I realized that it’s exactly the approach that more college recruiters need to take when they are creating messaging for their recruits.

Coaches need to show their recruits that they’re going to read greens better, if they commit to their program.

Here’s what I mean:

Coaches need to go beyond telling a recruit what they have at their school, how many championships they’ve won, or how new the locker rooms are.  Instead, coaches need to explain how all of those things will impact the recruit.

The reason that this is so important is because the research we’ve done on how recruits take in messaging from the coaches who are recruiting them clearly shows that they need a college recruiter to connect the dots for them.  You could talk with me adult-to-adult about your championships and past success, and I would understand pretty quickly why a smart recruit would want to be a part of that kind of history and tradition.  But most of the time, your teenage recruit isn’t going to make that connection.

You, as the person who is painting the picture for them, needs to go into as much detail as possible in explaining it to them.

And it needs to happen as early as possible, across all mediums.  Especially social media: When you post a picture, or show a video, make sure you are making the case to your recruit as to why it applies to them, and what it is that they will experience as a result of being a part of your program in the future.

It’s a simple concept, and it’s easy to implement into your messaging.  But it takes you making the adjustment in how you communicate:

Stop selling them new sunglasses, and start proving that when they put on the sunglasses, they’re going to read the green better.

There are intelligent ways to alter your communication to your prospects that will result in a higher likelihood of them seriously considering you as a potential program.  We’ve outlined one major way to do that in this article.  If you want more one-on-one help from our team of experts, email Dan Tudor directly at dan@dantudor.com and ask about becoming part of the Total Recruiting Solution client program.

Previous Post: « Pink Is The WORST Color
Next Post: Think About Adding The GoPro To Your Coaching Toolbox »