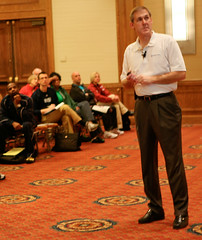 There’s almost an art to it, isn’t there?

They’ve taken their visit.  You’ve made your offer.

They’ve turned in their application.  You’re crossing your fingers.

And now you wait.

And wait, and wait.

How is there an “art” to it all?  Because if you don’t successfully play the “waiting game”, all your hard work goes down the drain.  The time period that many of you find yourself in right now as you read this is the critical phase in the recruiting process.  The sobering detail of that statement is that most coaches manage the waiting game very, very poorly.

Now the good news:  Today, I want to give you three, easy-to-implement ideas on how to effectively manage this crucial time period in the recruiting process.  If you’re one of our TRS clients, we can expand on this list, but use this as a starting point:

The common theme in giving these three recommendations is to maintain control of the recruiting process. Think about it: How often have you been waiting for a decision, or the next step, in the recruiting process with a student-athlete and felt like you didn’t know what was going on? No successful program that I’ve encountered has been built on coaches waiting in the dark for a recruit to meander through their mysterious decision-making process. As a coach, your job is to let your prospect make their decision, but give them the guidelines with which to do that.

Should you use these three guidelines?  If what you’re doing now involves you feeling like you aren’t in control of the process, or if your prospect that you have penciled in as your new starting point guard hasn’t returned your phone calls in about six weeks, or if you’ve stopped sending emails and letters selling you and your program they way you did right after you put them on your recruiting list, then I think it might be a smart move.

These strategies work, Coach.  All it takes to be successful is a willingness to try something new, and the willingness to take control of these final days of the recruiting process.

Previous Post: « The 5 Best Practices for Social Media in College Sports (Part Two)
Next Post: Adding Some Sanity to Your Coaching Travel Schedule »