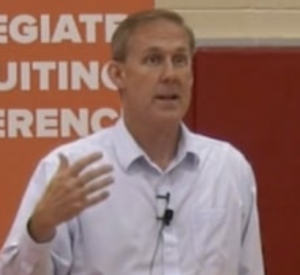 Recruiting over the phone is probably the most challenging recruiting task that a college coach faces – especially at the start of the process, when the relationship is still being developed between a coach and a prospect.  Whenever I get to talk to coaches at one of our On-Campus Workshops, and ask them about talking to prospects over the phone, it ranks just behind stomach flu and slightly ahead of hitting their thumb really hard with a hammer.

Those are just some of the questions we get from coaches on a regular basis.  And, they are important questions.  Because if you can’t communicate on the phone, all of the letters and beautiful brochures that you’ve been sending to your recruit these past many months just went down the tubes.

Tying together all of your recruiting communication so that it makes sense to your prospect and builds a logical case for why they should choose your program is essential to successful recruiting.

If you’re facing some important recruiting phone calls to new prospects soon, and need some quick tips to make sure they’re successful, here’s a few to take with you:

The magic ingredient to successful phone calls is when your call matches-up with the message that you’ve been talking about in your letters and e-mails.  After studying what makes athletic prospects say “yes” to a coach, I’m convinced it’s when they feel like everything makes sense and the message sounds genuine.

That’s a tough balance to achieve, and few coaches get it exactly right.  But when it happens, it’s magic.  And that coach will get most of the prospect they want.

Previous Post: « Why Knowing More About Yourself Can Launch Your Coaching Career
Next Post: What’s the Best Way to Uncover a Prospect’s Objections? »