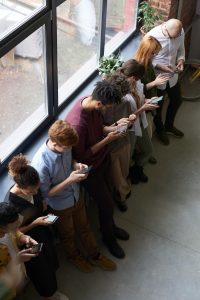 Do you ever find yourself using social media to procrastinate on the real work you should be doing?  I think everybody is guilty of it at some point or another.

I want to give you 2 simple ideas for apply right away to make sure you are not losing precious time on this possible deadly distraction.

Pro Tip #1: I want you to take the social media apps that you are currently on off the home screen of your smart phone.

I want you to place those social apps at least two, three, four, five, or even six screens deep so that you have to consciously swipe a few seconds to get to them.

No matter if you are using an android or iPhone, you can organize things in their own little section in a box if you wanted to put everything together.

This tip sounds so simple and it is so profound.

The impact can be huge because here’s the thing. A lot of times we log onto a social site out of an unconscious addictive habit. You know this, right?

Well hell. It’s a lot easier to pick up your phone, “I’m going to check my social feeds. I’m going to see who liked this. I’m going to look at this and go down a comparison sinkhole and do some compare-schlager shots.” You guys know this. It’s addictive and often times it’s unconscious.

However, when we put those social apps two, three, four, five, six screens deep, we organize them and it takes just a few clicks to get to it, it’s not so easy – what we do is we ensure that when we do  engage on social we are doing it mindfully and consciously, so we have a moment’s pause to ask ourselves: “is this really the best use of my time right now? Is this really how I want to be spending my life energy? Do I need to be going in there?”

And that little pause is enough to break an unconscious addictive habit and allow you to have more choice about engaging on social media.

Pro Tip #2: Schedule social media time in advance and make it another discrete task like any other. So rather than just picking up your phone haphazardly or going to it when things get a little difficult and you don’t want to confront those emotions or the blank screen or whatever it is that you really need to be doing to grow yourself as a human or to grow your program through recruiting… schedule time.

Schedule the time you’re going to check on your feed so that it’s contained and limited. From 10 to 10:30 on Tuesday mornings. From 6 to 6:15 on Thursday afternoons.

Whatever it is, schedule it. Right? So it doesn’t dominate your life.

Here’s a little stat I came across in a book so I don’t know the source. The average person is spending nearly 2 hours a day on social media. And I’ve got to be honest, I think it’s a hell of a lot more.

But 2 hours a day translates to a total of five years and four months of your life. Just think about that.

Even if this was completely inaccurate, you all know that most people these days are spending a whole lot of time on their phones and the majority of that is in social media.

Here’s what I DON’T want you to do — spend 2 hours a day on your social media. Yes, it’s important – but not important enough to spend years of your life working on it.

Instead, I want you to batch your time and efforts so that you’re maximizing the time you DO spend on social media and you’re being as efficient with your time as possible.

Want more pro tips like this to help you be a more productive coach? Mandy Green helps coaches waste less time and be overall more efficient with their responsibilities. You can set up a strategy call with her by emailing her at Mandy@Busy.Coach.