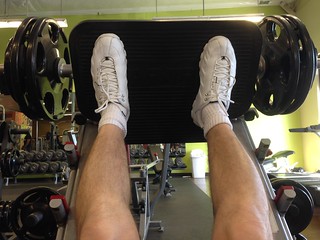 Rep #10 of any workout is the toughest rep.

Those are my pasty, skinny legs on repetition number ten at the gym this past week.  If my legs were the definition of college recruiting, I’d be out of a job.  I’m in the process of trying to undo years of sitting in front of a computer screen, flying across the country, as well as marginal eating habits.

Especially when you’re not on your game, rep #10 is the most challenging.

Many college coaches find themselves facing rep #10 as they read this today:  Their recruiting list is in shambles…they’re out of ideas on what to say to their prospect next…they don’t know what questions to ask…and, more for than a few, their jobs are on the line because of years of lackluster recruiting results.

Recruiting quality prospects is the most difficult part of your job as a college coach.  Period.  It’s not the X’s and O’s, it’s selling your program to teenage recruits and their parents.

And the toughest part of that process is “Rep #10″…what you do at the end of the recruiting process.  That, and that alone, usually determines how strong (i.e., not skinny, not pasty) your results are.  I once heard a great definition of the important of the last few reps of any workout, which said it was a lot like pumping up a bicycle tire: The first twenty pumps don’t make the bike ready to ride, the last three pumps do.  At the end of the process, college coaches need to focus on those final pumps.  Or, rep #10.

With that in mind, let me give you a quick checklist of three tough-to-do, but high impact, “rep #10” type duties that coaches can focus on at the end of the recruiting process:

Have the parents of your prospects define where you stand in their eyes.  It’s a hard “rep” because many coaches still don’t put a heavy emphasis on developing an ongoing conversation with parents.  If that’ you, put on the heavy weights and pound out this really important recruiting “rep”.  Often, you’ll get different answers – and more honest answers – than you will from your recruit.  And, honesty is really important at this stage of the game…you should want to know exactly where you stand as a recruiter.

Don’t assume that your recruit knows everything they need to know about your campus and your program.  Your prospect has been to campus, you’ve watched them compete in person a few times, you’ve talked with their coach, and you sent them the big, long letter packed full of information right at the beginning of the process.  What more could they want?  Most of the time, plenty.  As they go through the process, our research shows that they absorb very few actual details about your program if you aren’t consistently, creatively telling them a compelling story about why they should commit to you.  So, as you sit back and wonder what in the world you can tell your recruit that they don’t already know, try emphasizing the basics.  And, tie it back to why they should view your essentials as a smart reason to pick your program.  Most coaches won’t follow through with this recommendation, so it’s an easy way to gain some extra recruiting muscle in the later parts of the cycle.

Tell them you want them, and ask them if they want to commit.  Don’t think they need to hear it again?  Wrong.  They do…now more than ever, actually.  Haven’t verbalized those words yet?  Do it now.  I’m listing this as an official Rep #10 task because it’s hard to do, and some coaches find it awkward to do.  That’ why it often goes unsaid, and coaches just “assume” that their recruit know a coach wants them, and that they can commit anytime they want.  Unfortunately, that’s not the case.  For many other coaches, it’s just too scary: They view it as pressuring their prospect, or sounding too “desperate”.  Slap on the extra weights, and max out with this vital Rep #10 recruiting task.  Ask for the sale, Coach! 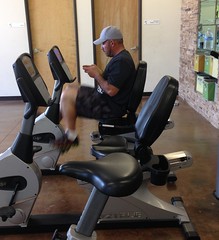 A word of warning:

Make sure you aren’t this guy when it comes to recruiting.  He’s got all the big brand clothes on, and he’s actually made it to the gym.  But every day, we see him sitting and texting while he does an off-and-on workout on the bike.  He’s not breaking much of a sweat, and it’s safe to say he’s not going to be at risk of pulling a muscle.

Recruiting at a high level is tough work.  It’s demanding.  It requires consistency, and a high degree of “pain tolerance”…unreturned phone calls, deceitful parents, uninterested teens, less than desirable facilities to show them when they come for their visit…contrary to what you might think, it’s not easy anywhere.  We work with more than a few extremely successful programs in many different sports and a lot of different levels, and I can tell you that when the office doors close, they have the same struggles and concerns that most mediocre teams’ coaches have when they assess their recruiting needs.

What separates a successful recruiter and coach from someone who ultimately fails at this important part of their job as a college coach is effort on rep #10.  Look for ways you can creatively and aggressively maximize your connection with a recruit and his or her family during the crucial final weeks of the recruiting process.

Want a great weekend of creative techniques, late-breaking research, and amazing speakers who reveal their secrets of successful recruiting?  Join us this summer at the upcoming National Collegiate Recruiting Conference!  It’s a one-of-kind gathering of recruiting minds and coaches from around the country.  Don’t miss it, Coach…click here for all the details.

Previous Post: « How To Handle The Naysayers
Next Post: CEO Or Silent Partner – What Kind Of Parents Are You Dealing With? »