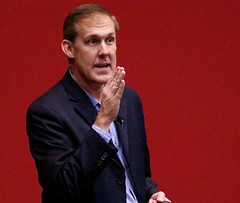 In today’s recruiting culture, which see’s contact between college coaches and teenage prospects happening earlier and earlier, talking to that recruit’s parents is an absolute must.

Put yourself at your prospect’s kitchen table for a moment, Coach:

As a parent, would you let your 15-year old Sophomore daughter call a coach that’s requested contact and allow her to take anything beyond the very basic first steps of communication with him or her?  Of course not.  As a parent, would you let your Freshman son commit to a campus visit during your family’s upcoming Summer vacation using his own judgement and discretion?  Hardly.

Not without talking to you, as their parent, first.

So you’ll understand why I find it surprising that many talented, smart college recruiters spend a majority of their time, energy and effort on forming a relationship with, and trying to get commitments from, a 14 or 15-year old child during the recruiting process without talking to the parents first.

Easier said than done, I know.  But as a serious recruiter trying to gain the trust of a family during the recruiting process, not making the same efforts to contact and develop the beginnings of a relationship with the parents as you do with a recruit is nuts,

In some of our latest research, we find that 88% of recent incoming college Freshmen say that their parents had substantial influence in their final decision making process, and more than 90% played a role in determining which colleges would make the family’s final “cut”, and which one’s should be dropped from consideration.

And some coaches want to avoid talking to parents…

It has to happen.  And, it needs to happen as early as possible, Coach.  Which means your first opportunity to talk to the parent of your recruit is going to probably going to take place over the phone.

To help get the ball rolling with the parents of your Freshmen and Sophomore recruits, I wanted to suggest several questions and talking points that we’ve seen work well recently.  Use these to establish credibility, get them to open up, and determine just  where you stand when it comes to getting them to take a serious look at you and your program:

If these questions sound like things you’d ask a recruit, that’s not an accident.  We find that most parents see themselves as equal partners in the decision making process, along with their son or daughter.  Furthermore, most kids not only want that to be the case, but expect that to be the case.

Want more motivation to engage parents of your young recruits earlier instead of later? Most college athletes that commit to one of our client’s programs open-up and describe their parents not letting them visit colleges where the coach had not yet talked to them yet.  That’s not universal, as some parents will intentionally stay quiet during the process in order to improve their son or daughter’s chances at getting recruited, but the majority (about 7 out of 10) will not fund an unofficial visit to a campus where the coach hasn’t first had conversations with them about their son or daughter.

Your goal in talking to the parents is simple, but important: Establish the beginnings of a relationship, and let them reveal things to you instead of you selling things to them.  If you do that, you’re going to notice an immediate change in the interest level of your recruit and their family.

The time is now to talk to the parents.

Want to dig deeper into the topic of recruiting the parents of your prospects?  Click here for a catalog of our past articles on the topic.  Some of them are reserved for our Clients and Premium Members, so to get access to that expanded section of the website click here.