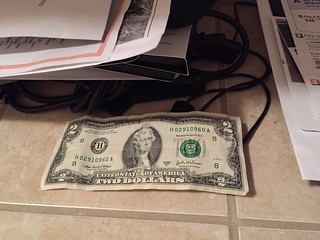 That’s a picture of a $2 bill sitting our counter at home.

In and off itself, that’s not unusual except for the fact that I have teenagers in the house, and loose cash never sits unaccompanied for very long.

But we’re going on three weeks of this $2 bill just lying around, in a place that gets passed by many times a day in our house.  I noticed that it remained untouched about two weeks ago, and now it’s become a sociological experiment.

An experiment that could have some direct implications for you and your program’s recruiting efforts.

Here’s what I mean:

In our experience of working with college coaches, we’ve kept track of some of the things that seem to keep a prospect from actively engaging with recruiters.  You see, there’s this delicate balance of being outgoing, creative, interesting and respected that sometimes crosses over into odd, bothersome or just plain weird.

I think that is what’s going on with our poor ignored $2 bill: Do I really want to hand a cashier a $2 bill?  What if they don’t notice it’s a $2 and they don’t give me the right change? What if they look at me like, “Are you serious, mister?”  It’s like the Susan B. Anthony dollar coin they issued a few decades ago. Seriously?…you want me to carry around  10-pounds of loose change that looks the same as a quarter?

I don’t want to see you being viewed that way when you interact with your next recruit, Coach. So I wanted to pass along several of the red flags that your prospect might view with that “are-you-crazy???” look in their eyes. Nothing too scientific, just general observations I’ve made in our work with our roster of clients:

Your first phone call goes past ten minutes. Your prospect is already a little uneasy about speaking with an adult on the phone – a device that they haven’t grown up with, at least the talking-into-it part. So when a coach takes the attitude that they’re going to try and prove how much the prospect means to them by spending 45 minutes on the phone with them the first time they talk, it is received negatively more than 8 out of ten times, according to our research.

You’re social media posts are a little too immature.  By “immature” I mean you come across as trying to be too much like a kid. Your prospects are really good at picking out the coaches that are trying too hard, and once they come to that conclusion it’s very hard to regain that command and respect most coaches want to establish.  It’s a fine line, because you don’t want to be so stiff and all-business that they aren’t able to relate to you, yet at the same time you can’t abandon your role as their recruiter and their coach. But once that fuzzy, hard-to-define line is crossed, you risk becoming that weird little $2 bill that sits around wondering what’s wrong with you.

You hang around the prospect and your team during a recruiting visit to your campus.  One of the complaints we’ve heard over the last decade from your college athletes while we are working with athletic departments conducting our recruiting workshops is that a coach at a college they were visiting never left their sight. We’ve heard athletes describe visits to schools where the coach would call the hosts every 30 minutes to check in, or hover around conversations and valuable team/prospect time, causing them to sometimes ask the current team members, “Is he always like this?”  Or, “doesn’t she ever let you guys be on your own?”  They notice how you are acting when they are on campus visiting your school, Coach. That’s why we devote an entire chapter in our book, “Freaking Awesome Campus Recruiting Visits” to create a new model visit with your current team, train them to conduct the visit, and then trust your hosts enough to get out of the way and let your team do the bulk of the recruiting.  It works, and it preserves your identity and a confident, normal college coach who gives off a positive vibe to his or her recruits.

You’re only sending them “business” communication.  Let me define that: Updates on your team’s performance, your monthly email newsletter, a new academic ranking from your school, news of a professor who was named tops in his or her field of study…it is very, very, very rare that one of your prospects is going to care enough about that singular event (or a string of those events) to cause them to choose you as their top choice.  As I’m tying this article, I can think of three instances where an athlete looked back on his or her recruiting experiences and was able to talk about “business communication” from a coach being the thing that swayed them to come to their school.  And that is out of thousands upon thousands of focus group conversations that we’ve conducted heading into second decade of work with college coaches.  The truth is, most (not all) send that out because it’s “something to send the recruits” and it’s easy.  It requires little effort in a day filled with a hundred other more important uses for your time.  But my warning remains: Relying on that kind of communication will not get consistent results, especially if you’re trying to set your sights on that “next level recruit” most coaches want to attract.

Not asking them for a commitment during their visit, or at least outlining what their status is. In fairness, this isn’t “weird” for your recruit. It’s just incredibly disappointing, and causes them to question what your intentions are. Even if you aren’t their top choice during your visit to campus, they want – and expect – to be pursued.  They are looking for a serious commitment from you, because I can tell you that when they make the effort to come to campus (even if it’s an official visit and you’re paying for it) they view that as a big commitment on their part. How you ask for a commitment, or outline your plan and their status, is going to vary strategically from recruit to recruit.  But the important thing I want you to know is that if you don’t do that, it’s highly disappointing to them.  And, it can negate any of the positive feelings you and your team has earned in the recruit’s eyes as they leave campus empty handed.

Why do they still print $2 bills?  I don’t know…perhaps so grandmothers around the country can have some creative to give to their grandchildren inside of a birthday greeting card.

Why do coaches still make some of these very basic, easy-to-fix mistakes?  I don’t know that either. But I’m guessing it’s in the absence of a better plan, and a better recruiting strategy.  Or, worst of all, because “that’s the way they’ve always done it.”

Just hear my plea: Your prospects are actively looking to see if you’re a coach who they would enjoy competing for, and like being around. Do everything in your power to demonstrate that you are that coach.

We will expand on this topic at the upcoming National Collegiate Recruiting Conference. You need to be a part of that, Coach. You can register here to reserve your seat and get all of the details about the upcoming event.

Previous Post: « 6 Keys to Creating Impactful Recruiting Letters
Next Post: How I Use Sticky Notes To Be A Better Coach »