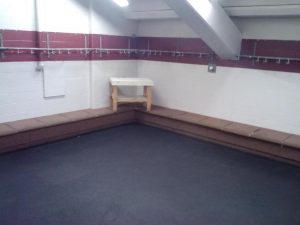 In almost 40 years of being around sports closely, as a broadcast journalist and now seminar leader, I have had the opportunity to visit many of our sports mecca’s in America.

Lake Placid ranks right up there. Actually, the only two times I have had actual goosebumps were my first time on the grounds of Augusta National during Masters week, and my first visit to Team USA’s locker room in Lake Placid.

Above is a picture I took of when I first visited the famous locker room where coach Herb Brooks told his team, “You were born to be hockey players, every one of you. You were meant to be here tonight. This moment is yours.”

Just above you can see a beam where the stands were literally just above them, and where 11,000 people had crammed into a 7,700 seat arena, chanting USA, USA, USA! Al Michaels, then 35, said the chant originated there during the Czech game earlier in the Games.

Many of you don’t have the best of facilities. When you go in that locker room, it is startling how small it is and how little room there was for the trainer to work. How 20 young men and a coaching staff did their work in there is inspiring. They have kept it just as it was, and it is no doubt a bucket list destination for those that love sports history.

When you recruit athletes, you want the kind of young people that can handle the variety of emotions that will happen in a locker room. After the 1st period of their first game vs Sweden, when they trailed 1-0, Herb Brooks knew he had to light a fire under his team. Had they lost to the Swedes, they had the 2nd seeded Czechs next. A loss to them too, and kiss the medal round and possible Soviet game goodbye. Brooks knew player Rob McLanahan had taken his uniform off from a deep thigh bruise and Doc had ruled him out. After finding out playing on it would not further injure it, Brooks challenged him to put his gear back on, and then took a verbal swipe at his affluent background. McLanahan came at Brooks, they had to be separated, and fell out into the hallway to the Sweden locker room area. McLanahan came back in, gimpy, and the US salvaged a 2-2 tie.

In that locker room, Brooks had a variety of talks. He was soothing before the Soviet game, his words carefully constructed to reaffirm to them that it was their destiny to be there. During the Norway game, when the team had struggled out of the gate, he simply told them they could do better and kept it short and sweet. Before the final period of the Finland game, trailing 2-1, he kept his talk to less than 15 seconds, saying, “You lose this game, you take it to your graves.” He went back out and back in and said, “To your graves.” 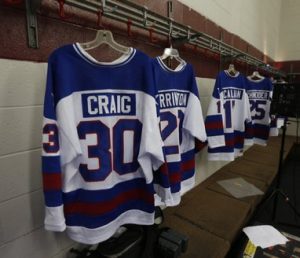 Take a trip to your locker room sometime and reflect on the various talks you have given there over time and the emotions that have ranged from coaches to players. Think about the kind of young person that can take the highs and lows. Rob McLanahan, though infuriated, hobbled back to the ice three minutes into the next period and played the rest of the way basically on one leg. When out of the game, he stayed as far away from Brooks as possible. Ever the team guy, he missed the Opening Ceremonies the next day to get treatment on his leg to get as healthy as possibe as soon as possible for his team. Today, he is on the board of directors of the Herb Brooks Foundation.

Your facilities may not be the greatest. They may be pretty bad, but the greatest moment in United States sports history happened in a hole in the wall locker room in Lake Placid, New York, with a couple of bathroom stalls and a small table for the trainer. When all 19 surviving players returned to Lake Placid last week for the first time as a team since 1980,
they went in that locker room and smiled. They wouldn’t have had it any other way.