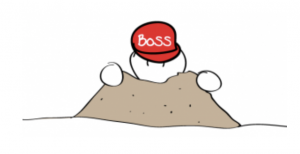 I want to share one of those “priceless” things you learn early in a college coaching career, and you wish someone had told you about on your very first day. (Or if they had told you, you wish you had listened a little more intently).

When I first started coaching (as a college assistant coach), I was under the impression that I had three main bosses: the Head Coach, the Athletic Director, and the President of the school.

My view of the world was basically “Keep those three bosses happy and all would be great!”

Boy was I mistaken.

Although those three were my supervisors and superiors, and they wielded some power, they weren’t my REAL bosses.

These REAL bosses were the folks who truly wielded the power.

They had complete control, on any given day, to either make my work life easy or difficult.

I was at their mercy, and when I started coaching I didn’t even have a clue.

And at the exact moment I caught on the chances of my career being longer than one season wickedly improved.

Who were those bosses?

Total control of money matters, recruiting information, time sheets, transportation requests and just about anything else that dealt with the organizational aspects of coaching rested in this person’s hands (or on their desk). That was a lot of power.

He controlled the gas pumps/cards and any vehicles used for transportation or recruiting (two critical items for any college coach).

Bluntly, on a daily basis she had control over who participated, and who sat out. I thought I made the line-ups, but one word from her and those line-ups were not even worth the paper I scribbled them on.

The director of an admissions office can have a bigger impact on your roster than you, no matter how proficient you are at recruiting. That’s power.

In The Army Now?

Like the sergeants in the Army these folks knew how to get things done. And like sergeants, they deserved respect for what they knew and what they did.

As I said, luckily I caught on to this real quick—but so many coaches don’t.

The same thing happens in almost every business—there are those hidden bosses.

And what if coach somewhere besides a college? You still have hidden bosses. Do you know who they are? Who really has the power and control over your job?

This is really worth dwelling on

Those coaches rarely last very long. Not because of their won/loss record, rather their poor treatment of a hidden boss came back to haunt them in ways they probably could not foresee.

Just a lesson to be learnt about how things (organizations) really work. Pay attention to your REAL bosses.

Your career will thank you.

I have a goal, to help 1000 coaches improve their experience as a coach. If you’re willing, would you please share this with one coach who matters to you? If only one coach reads this because of you, the net results is that you help them have a better experience and help me get one step closer to my goal. A double-win. Actually a triple-win, because we might keep a hidden boss happy and who knows what impact that could have on us!

Thanks for considering this.

Previous Post: « Before Fall Travel Starts, Read This
Next Post: Last Week I Forgot to Tell You »