College coaches often like to read books on coaching legends before them. In my research on how the Miracle on Ice happened, besides trips to Lake Placid and interviewing those connected to it, I have read and re-read every book out there on it. What’s ironic is that because it became such a huge event back in 1980, the nation’s top media was there. As a result, many remarkably talented writers have documented their story.

As I have said here before, Herb Brooks was a top D1 coach for 7 years at Minnesota before taking over the Olympic team. In several books his recruiting strategies are shared. There is a wealth of insights that can help college coaches today in recruiting and beyond.

One book I suggest is ‘Herb Brooks : The Inside Story of a Hockey Mastermind.’ It is by John Gilbert, the sports writer that covered Herb, his recruiting and much more.

‘America’s Coach: Life Lessons and Wisdom for Gold Medal Success: A Biographical Journey of the Late Hockey Icon Herb Brooks’ is another book I highly suggest you have as Ross Bernstein also gets into Herb’s philosophies of recruiting and building a program. Bernstein also includes texts of many of Herb’s motivational talks, and they are priceless. Bernstein has also written ‘Remembering Herbie’ which really gets into the remarkable impact Herb had on people through relationships. Recruiting is all about building relationships. 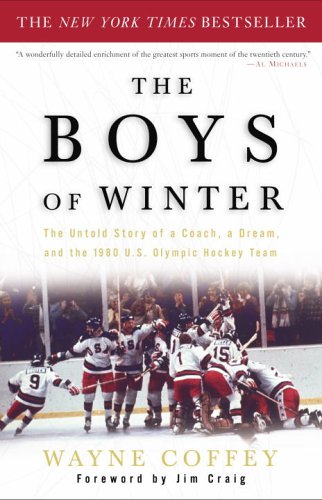 The brilliantly talented writer Wayne Coffey wrote a New York Times bestseller called ‘The Boys of Winter’ which gets into the back story of the players and their families and their remarkable dedication to the craft of skating and hockey. I have read that book 6 times and find it fascinating. It would be a great read for you over Christmas.

The book ‘One Goal’ by John Powers and Art Kaminsky really goes behind the scenes on the sculpting of that Miracle team. What I have found is that all these books offer different perspectives and each has gems in them that can be valuable to college coaches and athletes.

‘Going for the Gold’ by Tim Wendel was written not long after 1980 and has timeless tools in it on how Herb recruited not the best players out there, but the right players.

When I ordered some of these older books, I was saddened to see that some of the used copies I got used to be in libraries, and had been discontinued in those libraries. It has been 35 years since Lake Placid and if we are not careful we are going to start to lose their story. I was a sports anchor for a quarter of a century and have followed sports closely for 40 years, and never have I covered or found a story as fascinating as their story. When I speak, I often ask groups if they remember it. Many over 50 do remember where they were. Younger people have seen the movie Miracle, but so many either don’t know of their story or have no idea how powerful it is.

I find college athletes that hear my research on them become enthralled with how their team came together to record the greatest moment in United States sports history. They come away feeling there is no team that they cannot defeat and nothing they cannot overcome.

Motivational Speaker Charlie Adams delivers his More Than a Miracle program to college coaches and athletes. He explains how the 1980 Miracle on Ice was not so much a miracle as it was work ethic, remarkable vision and leadership, commitment to change, commitment to team, and perseverance.Charlie can be reached at StokeTheFireWithin.com and at charlie@stokethefirewithin.com