It is often said that you cannot win without outstanding athletes, but never underestimate the importance of coaching and recruiting.

After Herb Brooks led the 1980 Miracle on Ice hockey team past the Soviets 4-3 and to the gold, the legendary Anatoli Tarasov – one of the founders of the Soviet hockey dynasty – said this: “The line up of the 1980 Olympic champions – not so impressive. A couple of classy defensemen, about five individually strong forwards – and that is all. But the trump card for the U.S. team this time was its coach Herb Brooks.”

In sports history, Tarasov is like John Wooden. When he would speak, all would listen.

Historians have said none of the 20 U.S. players would have made the Soviet roster, yet Herb won with them. In my teambuilding sessions for
college programs, I share in depth how he did it, and one of the things he did was go to the head of the Psychology Dept at the University of Minnesota and have him prepare a 300 question questionaire for the prospective players. None of the questions had anything to do with sports, but more about how they could handle stress and change. Herb wanted players who could deal with pressure and embrace the total shift in playing style he would teach them over seven months. He also wanted young men who could take advantage of opportunities.

In the seven games at Lake Placid, the team was brilliant when it came to seizing opportunities. In game one vs Sweden, they trailed by a goal with a minute to go. A loss and medal hopes were slim and none. Herb pulled goalie Jim Craig with less than a minute to go to get another skater on the ice. With half a minute to go Bill Baker, now an oral surgeon, scored.

In the historic game vs the Soviets, Team USA was out shot 39-16 but took advantage of opportunities. With :05 to go in the first period Mark Johnson saw the Soviet defenders and goalie Vladisav Tretiak relax a bit anticipating the end of the period. Johnson soared at the puck like a bullet. Why? Because in the pre game speech Herb had told them they were born to be hockey players and meant to be there that night. Mark believed that it had been written in a book centuries ago that he was meant to be there, so the fired at the puck and scored with :01 to go. The goal so rattled the Soviet coach that he pulled Tretiak – one of, if not the greatest goalies ever – for the rest of the game.

Herb recruited and molded not the best college and amateur players in the nation, but the right players. The nation’s leading college scorer was not on his team. Herb wanted a team of players with a bucketfull of working class gumption and flying skates. Like many of you today, he knew the value of speed.

While it is important to give great respect to players and you can’t win without great and special ones, Tarasov makes it clear that the coaching, mind games, and drive of Herb Brooks was the main reason they won that year.

One resource I suggest for you is the book America’s Coch by Ross Bernstein. It is filled with insights on how Herb did it, and also includes transcripts from many of his motivational talks. There is more info at bernsteinbooks.com

In my on site college team building seminars, I share step by step how that team made history and earned the honor of the greatest U.S. sports accomplishment of the 20th century. 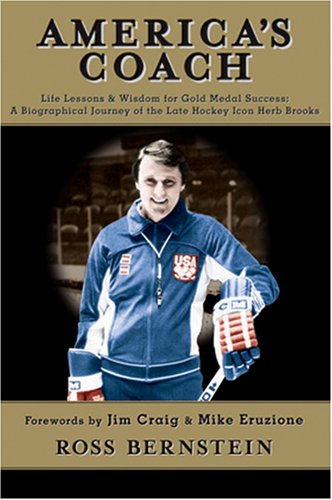