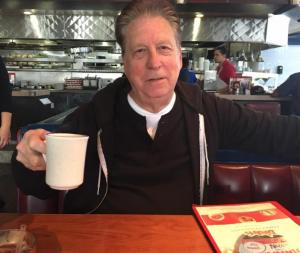 If you’ve ever wondered about the idea of truly “learning how to sell” when you aren’t a natural born salesperson, with a sparkling, outgoing personality and a way of summoning up just the right words in every situation, meet Jim Holvay.

If he could learn to be successful in selling, so can you, Coach.

Holvay was a hit songwriter and rock-n-roll musician in the late 1960’s through the 1970’s. One of his songs spent two weeks at #1 on the Billboard charts, and he had other hits, too. He was touring the country, hanging out at the Playboy mansion, and was only focused on writing the next hit song.

Then his music career came to an abrupt end. With a wife and young son to support, what was a newly unemployed rocker to do?
He learned how to sell.

In this episode, you’ll join Jim and Dan Tudor at Dinah’s Family Restaurant in Southern California for a fascinating (and funny) conversation about learning how to sell, and what real-world lessons coaches can learn from this rock-n-roller’s wild ride into a 30+ year career in sales.