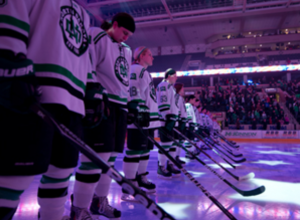 On March 29, 2017, the University of North Dakota announced what many other colleges around the country have had to announce in recent years: They were cutting three sports from their Division I athletic department.

The sports included men’s and women’s swimming, as well as their women’s hockey program. The later was surprising to fans, local media, and supporters of the school. Hockey to North Dakota is what football is to Texas. And yet, according to university leaders, budget cuts had to be made.

The result, of course, goes beyond line items inside an athletic department budget; it also means trauma for the coaches who built those programs, and the student-athletes who came to the school in hopes of living out their dreams of high level college sports.

In this episode, we talk to one of the coaches and one of the players from the UND women’s hockey program. They take us inside the day they found out about the elimination of their program, what they’ve learned, and why they decided to fight to save it in the aftermath of the shocking news. We also talk to the Athletic Director of Sweet Briar College in Virginia, a Division III women’s college that nearly ceased to exist in 2015 when the school’s board announced they were closing due to severe financial challenges. The college’s alumni, supporters, students and athletes rallied, and saved the college. How did they do it? And, what lessons could they offer the UND programs that were cut, as well as other coaches who might face the same crisis at some point in their college coaching career?