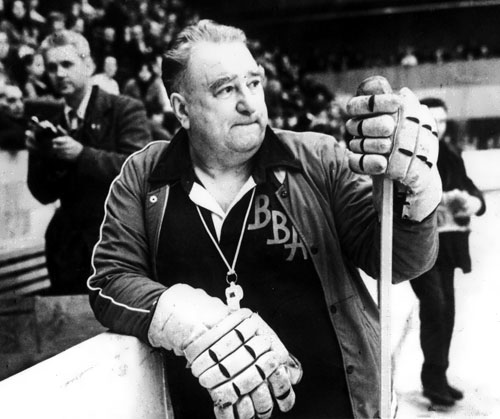 Anatoli Tarasov is the man that built Soviet hockey into the world power that it was for decades. He started the process after WWII, and made them so dominant that under his direction, from 1963 to 1972, the Soviet hockey team won every major international tournament, including nine World Championships and three Olympic gold medals. He did this without studying Canadian or other forms of hockey, but by consulting champion chess players, ballet developers, circus creators and writers. As someone who was a sports anchor for 25 years, Soviet hockey was the most creative and lethal form of sports I have ever seen.

As Tarasov developed his players he wanted them to be able to do, or have, three things on the ice:
* The accuracy of a sniper
* The wisdom of a chess player
* The rhythm of a musician

As you recruit players, those are three attributes to look for in your prospects.

Shockingly, Tarasov was not the USSR coach in Lake Placid in 1980 as earlier in the decade the Soviet leaders had wanted him to throw a game vs the Czechs to improve relations. He didn’t have to lose, as a tie would do. Tarasov would not, and was fired at 54, leading to Viktor Tikhonov becoming coach. He would make possibly the worst decision in coaching history when at the end of the 1st period in the USA USSR game, he benched legendary goalie Vladislav Tretiak. Tikhonov’s blood was boiling that Tretiak had given up two goals, so he took him out. That would be like Golden State Warriors coach Steve Kerr (Luke Walton!) taking out Steph Curry for good early in the 2nd quarter of Game 7 of the NBA Finals because Curry went 0-7.

Mike Eruzione would take advantage of Tretiak being out, as he scored the winning goal with 10:00 to go in the game, off the Soviets backup goalie, and the USA won 4-3.

Eruzione had four things coaches look for in recruiting.
* Drive
* Resiliency
* Team loyalty
* Instinct for the big play (besides the winning goal vs the Soviets, he also scored 3 goals in his state high school championship game, and had other pivotal goals in Lake Placid, even though his skating and shooting skills were not as gifted as many teammates)

Eruzione in Italian means volcano. You want recruits that can erupt in all of the positive ways. He also played with nuclear passion, and he was Pete Rose on skates. Those are the kids you win with.

While the Miracle on Ice has received the most attention from the 1980 Winter Olympics in mystical Lake Placid, New York, Eric Heiden’s five gold medals in speed skating were just as historic. Heiden won five of the six total gold medals the United States earned that winter with the hockey team getting the other.

Heiden had 29″ thighs and a 32″ waist. His body was Adonis-like. He also had a steely determination. Columnist Thomas Boswell of The Washington Post sized him up this way:
“Many athletes have muscles. Few have Heiden’s strength of mind, his mulish will inside a thoroughbred’s physique.”

As you recruit, that is a powerful combination to look for, and a great quote to share with your physically blessed athletes, so that they always remember to keep driving even if they are more blessed athletically than others.

Charlie Adams speaks on Lake Placid and the Miracle on Ice. He believes what Herb Brooks did back in 1979-80 was the greatest coaching job in sports history with the U.S. Olympic hockey team. Adams’ also feels Brooks’ was a spectacular college coaching, taking an 8-24 University of Minnesota team and within two years winning a NCAA Division 1 National Championship. Adams inspires today’s coaches and athletes with the story of America’s greatest sports moment, the Miracle on Ice, as well as the fascinating stories of the champions of Lake Placid, a village of 2800 that has produced someone in every Winter Olympics since 1924. To contact him for information on his programs email charlie@stokethefirewithin.com