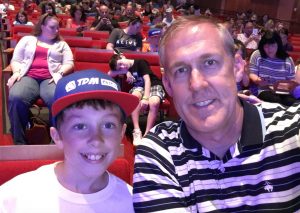 I “took one for the team” this past weekend (‘team’ being the Tudor family) and took my 11 year old son to see his favorite celebrity.

Come down the rabbit hole with me a minute. If you do, I promise you’re going to come away with lots of good recruiting take-aways.

“TDM” stands for The Diamond Minecart. Dan TDM is a professional gamer. He plays video games for a living, videos himself doing it, and then posts those videos on YouTube.

He has just over 15,000,000 subscribers to his free YouTube channel. Most of them are four to six years away from being the kids you begin recruiting. I got to sit with several hundred with them, and saw their devotion to one of their favorite YouTubers who they were getting a chance to see live and in person.

By “seeing him live and in person”, I mean paying good money to go sit in a seat and watch him play video games on a giant video screen on the stage (Here’s a taste from a different concert location. Did you watch it? I know, I don’t get it either).

My son, and the rest of the kids in the audience, knew all the characters he referenced, all of the subplots, and the insider jokes. I was clueless. At the jokes, and also why my son and his fellow Dan TDMers love his act so much.

That’s where the recruiting lessons come in for you, Coach.

You are on the verge of communicating with a generation of kids, both male and female, who are set to follow those that can entertain them, as well as make them feel part of a special community. Sure, the current prospects you are recruiting want elements of that, but the next wave of recruits will have grown up watching YouTube, and regular people who have turned themselves into international celebrities doing fairly average things in front of a camera. 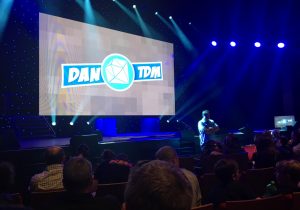 That’s a big switch if you think about it. You are moving into conversations with kids who are going to demand even more personalized, more consistent, and more entertaining stories from people who are including them in a small community. That’s not going to be an optional thing for you in a few years, Coach, because just as we analyze the current generation’s communication patterns, we’re going to be doing it even more in the coming years. And if you think that Dan TDM fans aren’t being shaped to take in communication in a very specific way, you’re fooling yourself.

The big lesson I am hoping you take away is that in the fight for your recruit’s attention, you’re going to have an increasingly bigger hill to climb.

Dan TDM has the followers he has not because he is an amazing actor (he’s not), or has an especially special skill (he doesn’t). The reason he has as many followers as he does is because he’s genuine, he’s meeting young kids where they’re at (gaming), and he is consistent. He releases videos every few days, right on schedule, and has been doing so for years and years.

If you take the time to study how he’s built his following with the kind of passion that demands moms and dads everywhere take their pre-teens to see him in person, you’re going to have a really good roadmap for how to build an effective story – now and in the years to come.

This is the generation quickly coming just around the corner, Coach. Understand them as best you can before you need to.