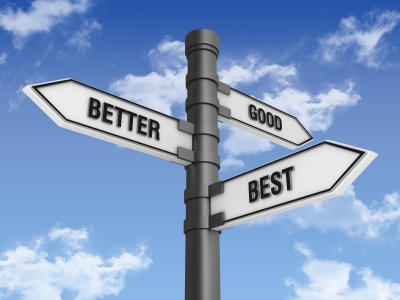 The same holds true for the coach who wins their conference championship, only to lose a kid to a program with a new coach and no winning history.  Or, the coach who can boast that her program is closer to home, only to lose the prospect to a school 2,000 miles away.

In each case, the coach can make a very good case that their program.

Their prospect may not care about their version of “better”.

This time of year, college coaches need to be aware of this very important reality with recruiting this generation of teenage prospects.  Whereas you – being a smart college coach – have made career decisions, recruiting decisions, and game decisions based on the best (or “better”) information possible, your recruits aren’t using that same process.  As we’ve chronicled in detail over the years, your prospects make decisions based largely on emotion (and so do their parents).

So, as a coach begins to formulate a recruiting strategy based on simple assumptions on what’s better, they run into the stinging reality that their recruits aren’t operating on the same level.  What I’m saying is that many of your prospects that you’re in the middle of recruiting may not really care about your version of “better”.

Why?  There are some very simple, but vitally important, principles that you need to know if you want to successfully make your case to these athletes:

Your recruit may not know why you are the better choice.  How could that happen???  You sent them two or three very detailed messages, outlining all of the awards and honors your program and your college has won.  Plus, they came for a campus visit.  So how could be there be any confusion on their part?

Quite simply, because your story has been lost in the noisy, marketing-filled world that they live in.  That’s why we preach the need for a consistent, ongoing message starting as early as possible in the recruiting process.  We have case study after case study that proves this is the best methodology when communicating ideas to recruits and their parents.  If you aren’t sending out a message to your recruits every six to nine days that clearly states why they should choose you, there will be a high likelihood that they don’t figure out why you are the better choice. (If you’d like our help in creating that strategic plan, click here)

Your recruit may not believe what you’re telling them.  It’s another hard truth that many college coaches don’t put enough focus on: Your recruit needs more than just words, they need proof.  They need proof that your team, your program, and your school is going to give them exactly what they are looking for in a college.

It isn’t enough to just say that your classes have a great teacher-to-student ratio.  It may be true, but you have to assume that they’ll say “so what?”  Or worse, they may think to themselves, “that’s great, but every college I’m looking at has told me that…they’re just trying to sell me something.”  As a coach, let me ask you this important question: What have you told them that proves you are telling the truth, and puts it into context with where they are at in their decision making process?  Answer that question, Coach.  If you have a good answer, then you’ll be on your way to eliminating this point as a possible reason they would reject your version of “better”.

Your recruit may not believe the risk of switching allegiances to you is worth it.  For the top 1% in your sport, they have the luxury of picking and choosing the prospects that they want, and those prospects will happily accept their offer.  If you aren’t part of that 1%, you need to assume that there are legitimate reasons your prospect will have reasons to not choose you as one of their top choices.  Taking that glass-is-half-empty, worst case scenario approach will help you take the right approach as you communicate with your prospects.

This is probably the primary reason you lose most of your prospects.  They just haven’t come to believe that you and your program should be the logical choice.  Yes, it’s because of their own prejudices, ideas and decisions.  And most of those are illogical, or even downright incorrect.  But that’s what they believe.

Have you made the case to them that it’s worth the “risk” to say no to the program that they’ve dreamed of, and choose you instead?  And if so, how have you done that?  At this time of year, many of your prospects are deciding whether it’s worth the risk to choose you, Coach.  Be vigilant in how you help them do that.

Your recruit may not believe that your “better” is their better.  In fact, as you read the end of this article, I can tell you that in many, many cases that is true for your prospects.  Does it mean you can’t change their mind?  Of course not, but you need to take an aggressive, persistent approach in telling your story to that skeptical recruit and his or her family.  However, you also need to analyze where you are at in your conversation with that prospect, and make the judgement as to whether or not it’s time to move on.  There are times when it’s advisable to stop recruiting a prospect that is never going to belief your better is best.

The bottom line to the points I’m making here?  Adopting this philosophical approach to your recruiting process demands continual action.  Recruit is not a passive activity, and there are no down times.  This is especially true when you’re trying to convince an important recruit that you and your program truly are better than your competition.

Our Total Recruiting Solution program is designed to break through the clutter, and deliver consistent, research-based messages that connect with your prospects.  If you need help down the stretch, and in preparing to effectively recruit your next class, click here.

Previous Post: « Thanksgiving, Black Friday, And How To Get More From Your Coaching
Next Post: How to Effectively Handle Objections »