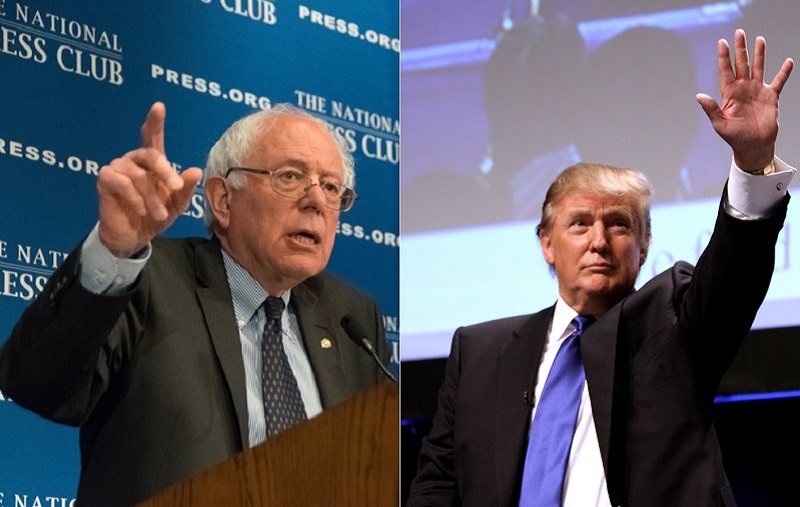 Politics offers some fascinating lessons for observant college coaches looking for lessons from the real world on how to effectively recruit their prospects.

After all, what is Presidential campaigning if not recruiting a few million votes from your fellow countrymen and women?

The similarities between recruiting and high-level political campaigns are numerous.

The Presidential primary campaigns of 2016, in fact, provide some fascinating examples of how to break through the clutter of the typical campaign white-noise, and what makes candidates rise – and fall – in this new era of message marketing and creating an identity that stands out from the rest of the pack.

Which brings us to the two most curious “recruiters” in this particular campaign cycle: Billionaire businessman Donald Trump on the Republican side, and self-describted socialist Senator Bernie Sanders on the Democratic side. At this writing at the start of September 2016, Trump is at the top of a crowded Republican primary field, and Sanders is steadily rising against the favored former Secretary of State, Hillary Clinton.

Which candidate you might favor – or despise – is irrelevant to the conversation we’re going to have today. To glean the lessons I want to focus on, you’ll need to suspend whatever partisan politics you might otherwise cling to and just study their methodologies, as well as some sea-changes in our society when it comes to how we perceive politics, candidates, party politics and the outsiders who are challenging the status quo.

If you can do that, I think you’ll come away with some fascinating lessons that you can apply to your recruiting efforts.

To start, lets focus on the question that is perplexing political pundits and much of the media:

How exactly are two outsiders doing so well against established, better funded, party-supported candidates? And what lessons do their candidacies offer college coaches?  Here are my four non-political-expert opinions and observations:

We’re at a time in our society when we are looking for something new. Politically, I don’t know if we know exactly what that is, given the political spectrum extremes of these two non-traditional candidates. There’s an element of frustration with the existing political powers that be, and these two candidates are taking advantage of it so far in these primaries.  The lesson for coaches?  I think it revolves around the concept of figuring out how you, and your program, can offer a recruit something different from the typical program and school. One thing we hear from high school student-athletes in the research we conducted is that they crave a reason to choose a school based on the unique selling proposition it offers them.  What story are you telling your recruits that differentiates you from the competition?

They aren’t afraid to be their own person.  In an age of carefully crafted, focus group tested, sound bite measured talking points, Donald Trump and Bernie Sanders break the rules. Sanders is frumpy and passionately plain spoken, and it’s attracting the attention of the political left. Why?  Because his message and personality stand out.  Trump is uber-confident and dismissively insulting to rivals and other opposition, and it’s attracting the attention of the political right. Why?  Because his message and personality stand out. The lesson for coaches? Don’t be afraid to passionately and confidently state your case as to why your program should be the obvious choice to your prospects, even if it’s not perfectly crafted…even if it might cause a certain percentage of your to turn away…even if it causes people to stare. Plenty of the best recruiters around the country have made a name for themselves in the recruiting world by being larger than life and unique; give yourself permission to develop your own unique brand as you aim to take on the traditional powers you recruit against.

It’s important to state your case quickly, and memorably.  In our work with our clients, we accurately point out that telling a compelling story over a long period of time is the key to winning over the best recruits on a consistent basis. The same could be said about candidates who run an effective, long term campaign. But if you’re an outsider, you’d better stand out quickly as you begin to make your case. Why? Because as we often point out in our popular On-Campus Workshops for athletic departments, this generation of recruits (and their parents) are scared of making what they could perceive as the “wrong” decision; in other words, it would be safer to opt for the less risky choice in a college program given the choice in a vacuum of mediocre messaging. All things being equal, the school that’s close to home, has a history of success, or is a little less money might all be considered the “safe” decision unless you make the case quickly that your prospect, and his or her parents, should look at their choices differently.  That’s what both Trump and Sanders did effectively at the start of their campaigns: They got the attention of their audience quickly, made some unique and memorable (if not controversial) propositions, and drew the attention away from their better funded, more “safe” competition. The lesson for coaches?  As you get ready to reach out to a new group of recruits, give them a quick and memorable reason to justify continued conversations with you. (Note: If you’re a client, we’ve created a list of some ideas on how to creatively and effectively initially reach out to your new prospects. Just click here).

They don’t care what people think about them. Sounds counter-intuitive for a politician, doesn’t it?  Yet these two candidates are completely comfortable with who they are, what they stand for, and don’t apologize for anything.  You don’t like them? Vote for someone else. They aren’t going to re-calibrate themselves just for the sake of gaining a few percentage points in next week’s polls. The vitally important lesson for college coaches?  Own who you are. Embrace it.  Your school costs $53,000 a year and you don’t offer athletic scholarships? Embrace it. You play in a facility older than Hickory High School’s gym in the movie Hoosiers?  Embrace it. You’re 60 miles from the nearest mall, and a fun night out on the town for your team centers around going to a Subway sandwich place down the street from campus?  Embrace it. If you’re ashamed or apologetic about who you are and what you’re all about, your marketing-saavy recruit will pick up on it.  Truth is, they are more interested in how you view your school and what you offer than their first glance opinions. Are you willing to make the case to them that what they see should be what they want to get? Trump and Sanders have no problem with it, and so far it’s working out o.k. for them.

Recruiting a high caliber group of student-athletes is a daunting task, made more challenging given how competitive the landscape is with your competition.

As you develop your next recruiting strategy, take these four lessons to heart and figure out creative ways to implement the lessons into your approach. The person you may end up surprising just might be your long-standing championship competitor down the road who chose not to implement strategies that fit the times we now live in.

Want more in-depth training and lessons on how to develop a creative and effective recruiting approach? Join coaches from around the country at Tudor University, our online training and certification program for college recruiters. It’s inexpensive and easy to complete on your schedule, and will stay with you during your lifetime of college coaching. Click here for all the details.